It was a grim 11th round of the 2013 F1® Championship today that ended in disappointment for the Lotus F1® Team as neither Lotus driver fulfilled their race potential showcasing their top flight racing talent synonymous with the sport.

Neither Kimi Räikkönen or Romain Grosjean had the best of starts, with both drivers beginning mid-grid in P8 and P7 respectively. Both drivers lost places during the first laps and struggled in regaining them. As Kimi begun his challenge it became clear that he had brake issues. The problem continued to escalate, thwarting his efforts until his race abruptly came to an end in lap 26. Brake failure meant the four-time Spa winner had to retire, bringing to an end Raikkonen's 28 consecutive point-scoring finishes, and his first non-classification in 39 races. He also now slips into 4th position in the Drivers Championship.

Romain fared little better, finishing his race in a disappointing P8. Overall, the team however retains 4th position in the Constructors Championship with 187 points.

Kimi Räikkönen. P2, E21-03 "I had a brake failure so there was really no point in trying to continue. We both got good starts off the line but there wasn’t enough space into the first corner where I went over the kerb and lost some time, but after that I was pushing as hard as I could. There were some brake issues at the beginning of the race but we were managing them and it was going okay until we had to retire. We’ve finished a lot of races and had some good reliability; one day your luck has to run out and today was that day." 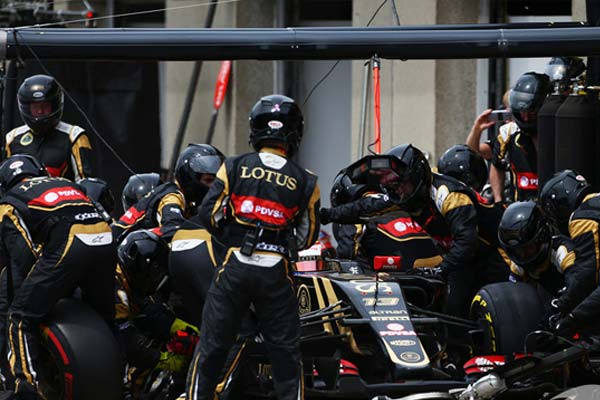 Romain Grosjean P6, E21-02 "We had a difficult first lap where we lost a few positions and then dropped back a couple more places in the incident with Sergio [Perez]. We decided on a one stop strategy today and with the new tyres I felt that the grip was much higher than before but I knew that it would be difficult to get the time back. We tried something different and you never know; had it rained in the middle of the race we could have been well-placed to take advantage. It is good to finish the race without any mistakes, even if eighth place isn’t what we were hoping for this weekend; it’s also a shame that Kimi didn’t finish the race, but we go to Monza hopeful of better things."

Eric Boullier, Team Principal "It was a disappointing weekend, with qualifying not as good as we had expected and then a difficult first lap in the race. Kimi suffered from a brake failure which, of course, is a concern. We already believe we know why it happened and we will investigate this in detail to prevent the situation arising again. Romain finished eighth which clearly isn’t the sort of position we hope for at the end of a race weekend. Today we lost some pace and part of that might be due to the low temperatures. We must now look ahead, learn from this weekend and make sure that next year we can deliver on a medium downforce track."

The next round of the competition sees the team head to Italy for the Italian GP at Monza on 8th September.