178
Description
1969 Chevrolet Camaro RS/SS Pace Car
After the success of the 1967 Camaro pacing the Indianapolis 500, just two years later, the 1969 model was chosen to pace the race again. Although the Camaro was still in its first generation, the car had been subtly redesigned over the years and the more muscular, cutting edge design of the 1969 car was the perfect candidate for the next pace car. For the 1969 race, Chevrolet teamed up with the Indianapolis Motor Speedway and provided all of the vehicles for the race- from pickup trucks and Suburbans to the Official Pace Car, with over 80 matching Camaros being designated to track officials and VIPs for use surrounding the race. For the 1967 Pace Car, Chevrolet built just 100 commemorative Camaros that were available to the public- after seeing their popularity, Chevrolet ordered a run of 3,675 for the 1969 car which have become extremely sought after in the collectors market.
Optioned with the Z11 package, this Camaro was built in the classic Pace Car specification by Chevrolet and shows just over 41,500 miles on the odometer. One thing that makes the 1969 Camaro Pace Car stand out over not just other Pace Cars but most every car from the era is the stunning color combination. All of the cars were painted in Dover White with the orange graphics on the outside- but on the inside, an orange interior with black and orange houndstooth seat inserts adds a level of crazy that was not the norm for American manufacturers at the time. This interior was paired with the Z87 Custom Interior Package that features special molded door panels, wood grain accents on the dash, gauge cluster and steering wheel- all of which give the car a more upscale quality inside and enhance the feel when in the driver's seat. When new, the car was also optioned with numerous features to make the drive much more enjoyable like Air Conditioning, power steering with a quicker ratio and a heavy duty radiator.
Under the hood, this car puts out over 300 horsepower and is specced with the now famous Z28 package. When Chevrolet developed the package for the car in 1967, the intention was to offer a single option box that would make the car race ready- engine, brakes, suspension and exhausts were all addressed- so naturally, it is the perfect complement to the Pace Car package. To add to the unique quality of this Camaro, considerable time has been spent amassing a collection of Indianapolis 500 related memorabilia that would be difficult to find elsewhere and is included with the sale of the car. The first and possibly most special artifact is a brick that was taken from the original Indianapolis 500 track before it was resurfaced. For decades, the Indianapolis Motor Speedway was nicknamed the Brickyard for its unique brick track surface and this is a great chance to own a piece of that lore. After a hard fought battle, Mario Andretti came out the winner of the 1969 race and his signature graces the sun visor of this car as well as a model of the race car that he won in and an Andretti commemorative coin. Also included, is an original ticket to the race, two programs from the day of the race and a Pit Pass Pin. To round out the unique items included with this car, a set of bumper attached flag holders and yellow flags mean that you can truly make your car look identical to that which was running in front of all the racers on the track in 1969. Out of all the first generation Camaros built, it is hard to pick one that is more instantly identifiable than the 1969 Pace Car. The unique colors combined with the sporty option packages mean that, at any car show, your car will be a hit. When you combine that with all of the special Indianapolis memorabilia that is included with it, this car is a one of one opportunity!
Additional Information
Standard Features
For more information on this 1969 Chevrolet Camaro Convertible Pace Car or any of our High-Performance, Luxury, Exotic, and Special Interest cars always in stock, contact one of our friendly and knowledgeable sales consultants or always feel free to drop by our 40,000+ sq ft of Indoor Showrooms in Bellevue, WA - Home of an Exciting Inventory of Luxury, Exotic, High Performance and Collectible Automobiles. Nobody Has What We Have!
Interior Features
Exterior Features
Mechanical Features
Safety Features
Similar Vehicles 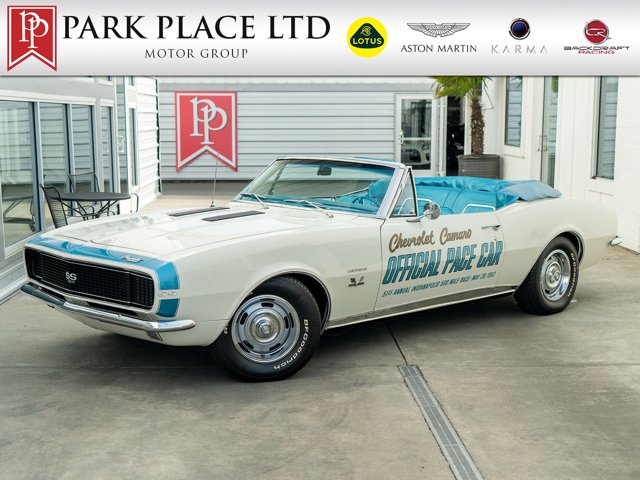